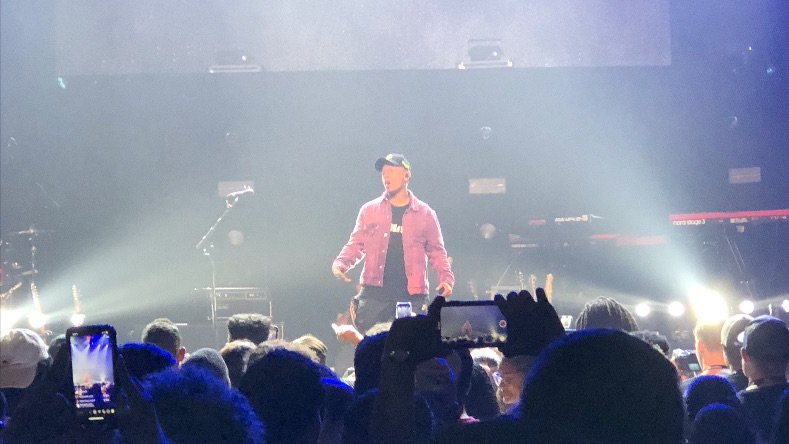 All 12,000 students at the Assemblies of God National Youth Convention were on their feet. Text “gawvifaf” to 555-888 to get the songs and share the experience!

Sitting at the keys in a theater in downtown Miami, GAWVI, Artist/Producer, and Dove Award winning songwriter crystallizes his reasons for doing creative work to just a few words: “My passion is to motivate and inspire, to urge people to tap into the potential inside them.” He’s playing a few notes, enjoying the lull of a quiet venue before it fills with thousands of screaming fans and supporters. Truth is, it wasn’t always like this. He wasn’t always rocking packed out shows, but he did know it would someday be his reality. Some might call it confidence in one’s ability, but GAWVI understands it as having a firm grasp on the greater purpose for which he was created.

Born to an El Salvadorian father and a Dominican mother, GAWVI’s parents instilled in him a sense of boldness from a young age. A first generation American, they taught him to live by faith and to use that faith to power his dreams. Naturally, they also introduced him to bachata and other Latin-Caribbean rhythms that helped form his musical palette early on. “Me and my sister would clean the house for hours listening to Selena, Juan Luis Guerra, all that,” GAWVI says. “It just became a part of us.” Throughout his late teens and early 20’s, GAWVI grew increasingly passionate about his heritage and felt he’d one day serve as a voice and source of inspiration for Latino youth and immigrants everywhere. “I just want to be a vessel, man,” he says, “one that pushes for change but encourages people to be who they are. Learning to be yourself, no matter where you come from, is the most liberating thing you can do.”

While working under the tutelage of hit makers Rodney Jerkins and Pharrell in 2011, GAWVI began to envision the future he’d always wanted for himself. For years he was producing for an array of artists, sometimes struggling to pay the rent, but getting by on his production credits and the occasional television placement. Then in 2012, after years of working with the label on various projects, GAWVI officially signed with Reach Records as an in-house producer and engineer. He started to strategically map out the direction in which he wanted to take his art.

Fast forward a few short years and not even GAWVI could have predicted the overwhelming response his music would receive. From producing chart-topping singles for Lecrae, Andy Mineo, and Trip Lee, to having his songs played on The Tonight Show Starring Jimmy Fallon, GAWVI has cemented himself as one of the most invigorating producers in recent memory. His aim is to usher in a new sound, and to redefine the possibilities of what popular music can accomplish. As a result of his refreshing approach, GAWVI has been able to carve his own path, merging hip-hop, pop, and electro to create a sound with a uniquely global appeal. Suffice to say, the world has taken notice, as his work has been praised on outlets like MTV, VH1, BET, Fuse, Esquire, VIBE, and elsewhere. Always remaining true to himself and his love for the creative process, GAWVI has given fans behind the scenes access through his “GAWVI Get ‘Em” Vlog series and offered producers sound kits designed and EQ’d by him. The highlight of GAWVI’s career has without question been his hefty contribution to Lecrae’s Anomaly, which made history by debuting at #1 on the Billboard 200. “I’m amazed at everything that has happened up to this point,” GAWVI confesses. “I feel like I’m just getting started.”

Enter 2016. After years of maneuvering behind the scenes and masterminding a host of albums and Billboard charting singles, GAWVI is set to venture out as a solo artist. Energized by his travels and his experiences as a husband and new father, he’s ready to add to his story via a batch of genre-defying material. “I’m excited to share this new music with the world,” he says. “My first solo album is going to be like nothing we’ve ever released under the Reach imprint. We’re about to really surprise people.” GAWVI is embracing the moment while also looking toward tomorrow. “The future is now,” he says as someone calls to him from backstage. Indeed, the future is now.